Ironstone is a durable, porous, glaze-covered heavy earthenware for which a 14-year patent was secured in 1813 by Charles James Mason. He and his brother, George Miles Mason, produced their Patent Ironstone China at the Patent Iron-stone Manufactory in Fenton, Staffordshire, England. By the time the patent expired, other Staffordshire potteries had developed similar earthenwares and, like the Masons, focused on the production of ironstone decorated with under-glaze transfer designs, many of which had an Asian influence.

By the 1840s such designs became outmoded, leading the way to the creation of new sharply molded white-on-white designs with clean lines and smooth white glazes for the North American market. While many of these designs were marketed exclusively in white, some were decorated with copper lustre banding and motifs such as tea leaf; others were adorned with monochrome or polychrome transfer designs some of which are known as flow blue, mulberry, and gaudy ironstone.

Who Made White Ironstone?

Between the 1840s and 1870s, the largest amount of undecorated white ironstone was manufactured by approximately 150 English potters. James Edwards has been credited with marketing the first white ironstone china in America in 1842.

What Types of Body Styles Were Produced?

Body style designs of the 1840s and 1850s were simple, many with paneled and geometric lines.  Late in the 1850s and into the 1870s, body styles with grains, flowers and foliage were produced and sold in huge quantities to the agricultural communities. Called thrashers’ ware, this ironstone appealed to the farmers who had to feed all the people who helped with the harvest. By the 1880s and into the early 20th century designs became much plainer with less embossing, and in many cases the ironstone became lighter in weight.

How Were the Body Styles Named?

Some body style names (also known as pattern or shape names) were given by the potters at the time of manufacture.  A few of the more well-known of these include Sydenham Shape, Ceres Shape, New York Shape, President Shape and Victory Shape. In addition, other descriptive pattern names have been assigned by collectors of white ironstone over the years to identify and categorize the embossed designs found on white ironstone.  Some of these names include Wheat and Hops, Scalloped Decagon, Paneled Grape, Fuchsia and Full Ribbed.  In all, hundreds of white ironstone body styles have been identified.

How Was White Ironstone Marked?

Most white ironstone made in the 19th century was marked with either a black stamped mark or an impressed maker’s mark. Beginning in the 1840s, stamped or impressed registry marks were also sometimes used. Such marks indicated when the body style had been recorded at the Public Records Office.

What Were Diamond Marks?

A search through the website of the National Archives at Kew Gardens in London, England provided the following information: Diamond marks were printed, engraved or otherwise marked on the underside of ironstone and sometimes on the underside of a lid. The mark was in the shape of a diamond with numbers and letters at specific points to represent the type of material used and the date of registration. The top of the diamond identified the class, which for ironstone was Class IV, Ceramic. 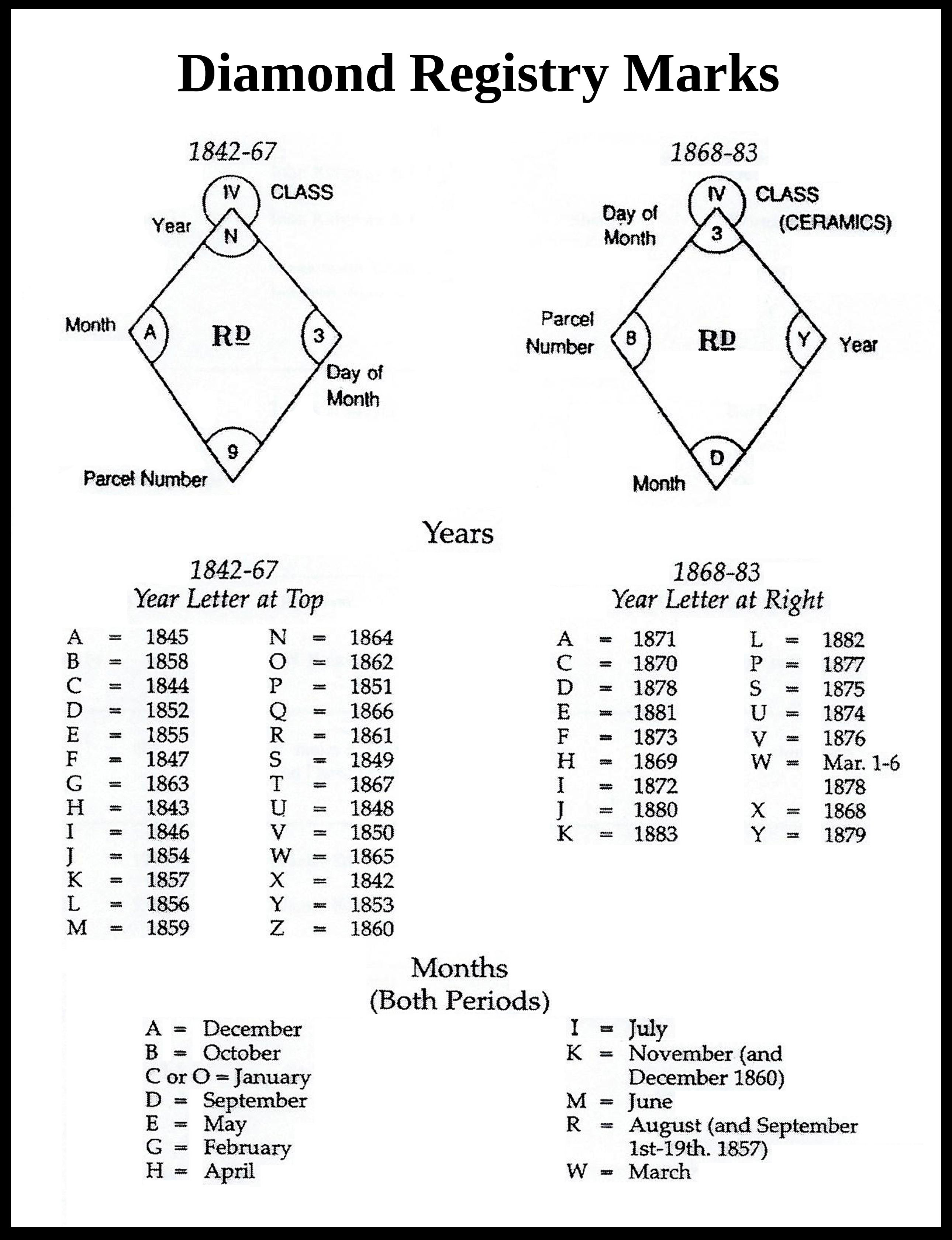 What Were Registry Number (Rd. No.) Marks?

These marks may also have been printed, engraved or otherwise marked on the underside of ironstone. They began with “Rd. No.” They were for designs registered under the 1883 Patents, Trade Marks and Designs Act (1884-1907) and the1907 Patents and Designs Act (1908-1991).

The list of items is extensive. Tableware and toiletware were produced in large quantities and in a variety of body styles.  Specialty items such as figurals, children's toy tea sets, commemoratives, and sanitary items were also produced.

Removing Discoloration and Marks Resulting from Use